This blog has before maligned a poor interpretation of the Martin-Quinn score, a measure of the overall ideological spread of the Supreme Court over time based on analysis of individual decisions. Properly understood, however, and to the extent that we trust the analysis, that measure is deeply insightful about overall trends and the relative players on the Court. 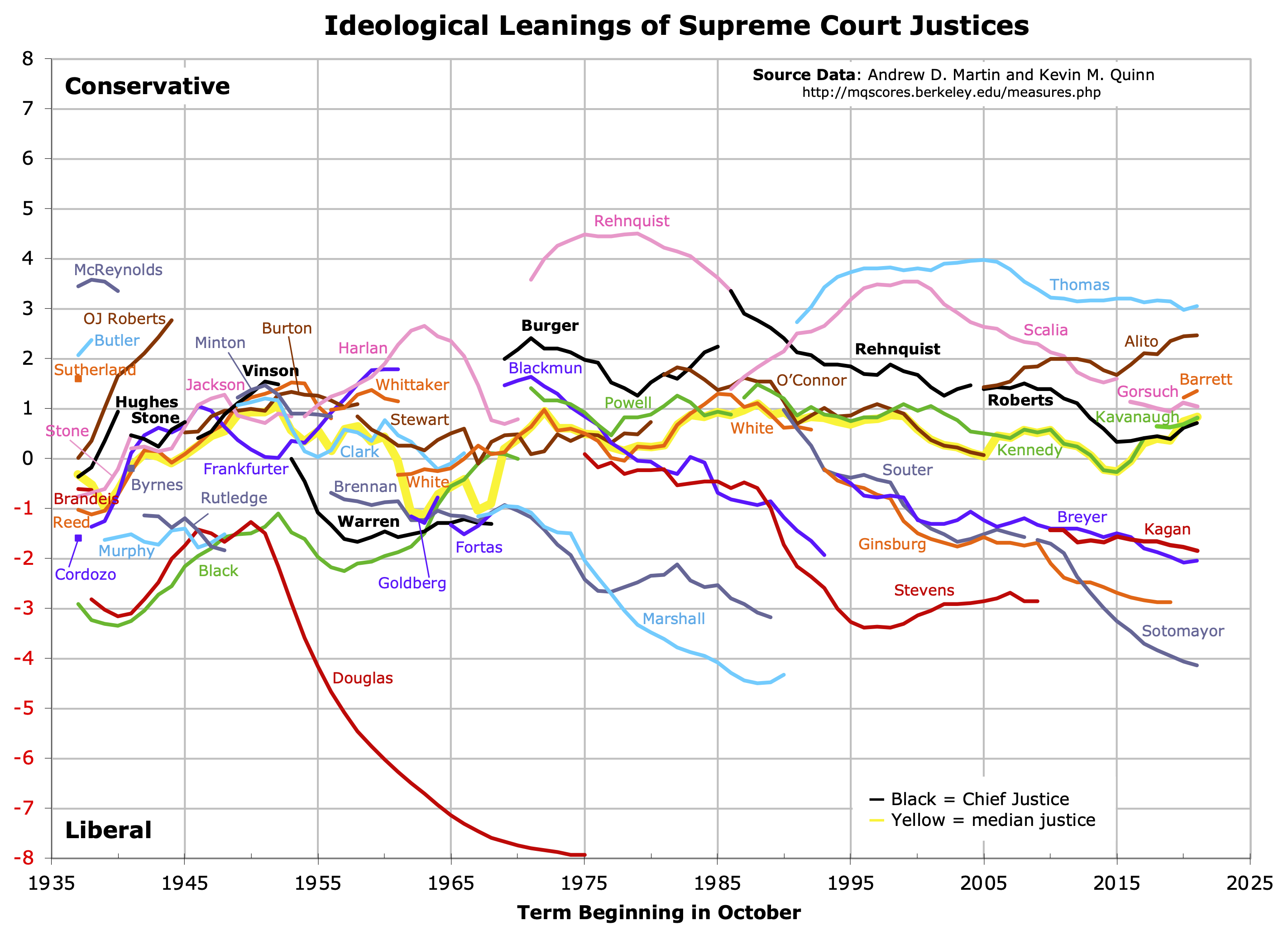 At first glance, this graph suggests that the Court has stayed mostly consistent over time. I think that’s actually the takeaway: the median justice has unsurprisingly stayed near the central axis. But note that it’s nearly always been on the conservative side of that axis. When has it wavered significantly?

Several Justices are significant outliers. The biggest is without a doubt the progressive lion and longest-serving member in history William O. Douglas. But his dramatic departure from the rest of the Court only pulled the median justice significantly leftward due to a few short-lived progressive jurists joining him in the 1960s who managed to somewhat compensate for Justice Harlan’s rightward drift. But trading Warren for Burger as Chief Justice swiftly undid that aberration and Rehnquist replacing Harlan magnified the correction. The Marshall/Brennan progressive tangent in the 1980s, another notable outlier, actually correlates with a conservative consolidation of opinion on the Burger Court. Justice Stevens’s sharply progressive turn was correlated with Justice Thomas’s scandalous and frankly bizarre replacement of Justice Marshall in the early 1990s; but that trend actually preceded it slightly, and that’s best explained by the one-two punch of Justices Scalia and Kennedy joining under Reagan.

When there were sharp jumps by seat in relative ideology as new Justices tagged in, it was nearly always to move sharply right, and especially so since the late-1960s. The median value stayed relatively steady across those jumps even as the median’s identity changed precisely because of the Court’s broad consolidation of opinion. And that opinion leans conservative: the median justice stayed right of center from Nixon to Obama. Kennedy was the median Justice under this measure for most of his tenure, but whenever he wasn’t, he was to that Justice’s right. Only in Obama’s second term did Kennedy “swing” the median slightly left of center, but under Trump he’s returned it to the same place it was during the Bush years.

My read of Kennedy is that he’s an idiosyncratic jurist with little scholarly merit who authors decisions that I’ve often found difficult to follow. He’s a reliably authoritarian conservative, but if he can clearly identify a poignant civil liberties harm — especially with his focus on gay rights — then he’s that “swing vote”. Let’s consider some of his major opinions:

The record here is mixed. He upheld Roe through an argument to precedent, legalized gay sex through an argument about personal dignity, and banned the execution of minors by noting that minors are particularly reckless. He struck down discrimination against gays by clear equal protection arguments but instead legalized gay marriage through roundabout arguments to due process. These can all be seen as appeals to leniency from state power for clearly identified groups. At the same time, he decisively stopped an election recount and reversed a century of campaign finance laws. Those decisions can be seen to cement state power over the demonstrated will of the people and their representatives when the individual impact is less clearly defined.

Where did Kennedy come down recently? In his last term, he:

These decisions don’t expose a tendency to be a “swing vote”; they show us a fairly consistent neoconservative who defends broad state police power (Carpenter, Currier, Trump) but balks at the mere speculative abridgment of speech by state regulation as a slippery slope toward authoritarian propaganda (Becerra).

How then would Kavanaugh’s appointment significantly alter the ideology of the Court? It’s fair to say that Kavanaugh or any other Trump pick would likely rule to the right of Chief Justice Roberts, and that would make Roberts the new median Justice. But Roberts has already been drifting toward the median, defying the nearly 50-year tradition started under Chief Justice Burger for the Chiefs to be sharply to its right. Kennedy’s recent rightward trajectory probably would have resulted in this change even if he weren’t about to leave the Court — he and Roberts have essentially the same Martin-Quinn score now. There’s a weak argument that it is actually Roberts who has been a real swing vote; this was most apparent from his shock 2012 opinion to uphold the Affordable Care Act that read like a decision initially to strike it down but was then reversed at the last minute. The identity of the median judge, the one most likely to cast pivotal votes, is not in question no matter who Trump might have realistically picked.

Kavanaugh likely won’t give Kennedy’s seat a sharply more conservative character [2]. What he would probably do is further exaggerate the leftward trends of the liberals, especially Ginsburg and Sotomayor, while making Thomas and Alito appear to be closer to the center. Depending on how often Roberts disagrees with the conservatives, that could push the median further to the left. But FiveThirtyEight reported this summer that Roberts has “cast a pivotal liberal vote only 5 times.” So the likeliest outcome of any Trump pick making it onto the Court is that it’s long tradition of being center-right is here to stay largely unperturbed.

[1] This case was particularly surprising to me since I had believed the travel ban was sure to fail under the Immigration and Nationality Act of 1965. That Act abolished the national quota system that for decades had codified national origin as the basis for granting immigration requests, and which heavily favored a handful of European countries over everywhere else. President Johnson so detested the quota system that, at a signing ceremony for the Act beneath the Statue of Liberty where he convened the entire Congress, he said the “system violated the basic principle of American democracy” and that it had been “un-American in the highest sense.” But in the same speech he pointedly referred to pre-colonial America as an “empty land,” a “wild continent” into which settlers poured where there was “no one to ask them where they came from.” This goes to show it’s also basic principle of American democracy to combine soaring rhetoric with blatant disinformation.

[2] To be clear, this author opposes Kavanaugh’s appointment on the grounds that his decisions and other writings have shown a undue deference to the executive branch as well as poor legal reasoning. But those traits are not alien to Kennedy. Kavanaugh may be more pronounced in his conservative leanings, but they will hardly be the generational shock that they are painted to be.