Let’s face it: no republican will become president in 2013.

That’s quite a bold claim, so allow me to defend it. The contentious republican nomination race continues without an obvious winner emerging as yet. There is still talk of a white knight coming to the rescue at the last minute, and this idea isn’t new: popular New Jersey governor Chris Christie was shamelessly pestered despite emphatic refusal to enter the race last summer, but he’s more likely to join the Romney ticket as VP; Indiana governor Mitch Daniels has been the target of speculation to fill this role, but he has also explicitly declined, and his official GOP response to Obama’s State of the Union speech in January, while popular on the far right, was quite frankly horrible in both content and presentation; even former Florida governor Jeb Bush is getting the eye, but it seems inconceivable that the republicans would risk their shot on a third Bush four years after the second one left office with the lowest approval rating in Gallup history. In short, the white knight scenario is not happening.

So four republicans remain in the presidential primary, and one of them will be named at his party’s convention in August for the general election barring some unlikely brokered convention scenario. But whom? 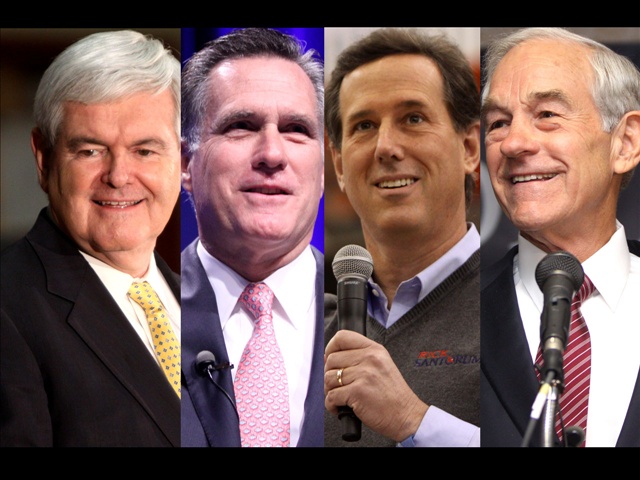 Mitt Romney has been the presumptive candidate since 5 November 2008, but he is so disliked by the skeptical base that they have been avoiding him since the campaign began.  He tried to claim he was ‘severely conservative’ as governor of Massachusetts, but he championed the health care model there that even his own former adviser said was basically identical to the widely-reviled Obamacare. He’s shamefully (and for some worryingly) waffled on abortion, even co-opting the tragic story of a relative when it was convenient for him. In fact, he has said so many contradictory things a dedicated website exists to playfully juxtapose them. He made his millions at Bain Capital by aggressively reorganizing businesses, often by laying off many employees, a practice he defended by saying he likes “being able to fire people who provide services” to him. If that wasn’t enough to cast doubt on his record as a job creator who will turn the economy around through fixing government policy, Bain bankrupted more than one in five clients but still collected its fees, and it multiplied its earnings through offshore tax havens. Romney favoured the bank bailouts but famously opposed the auto bailouts, so it’s no wonder he barely beat out Santorum in his own home state on Tuesday, winning by just three percent in the home state of Motor City. And if all that isn’t bad enough, he’s a terrible public speaker: trying to reverse flagging polls ahead of that Michigan nailbiter, he awkwardly mentioned how his wife drives “a couple of Cadillacs” and how “the trees are the right height” there. He has the charisma of a robot and has been called “intellectually bankrupt,” so barring some economic cataclysm or final proof that the long-form birth certificate really was a forgery, it just isn’t conceivable that Romney can beat Obama in November.

Former Pennsylvania senator Rick Santorum, despite appearing to be the best available not-Romney (at least by delegate count), is unelectable: he called Obama a snob for encouraging higher college enrollment, his culture warrior attack on contraceptive access cannot resonate in a country where the vast majority of women use contraceptives, and his loud but aging views about gay rights don’t track with the progressive views rapidly sweeping a country that now allows gay marriage in eight states (with at least two more soon to follow) and overturned DADT with bipartisan support. Santorum was almost certainly behind a lot of earmarks during his tenure as senator. He blatantly misread a famous and moving speech given in 1960 by then-senator John Kennedy, a fellow Catholic regarded at the time in some quarters with suspicion, about the separation of church and state, saying it made him want to “throw up.” Santorum has said enough stupid things since he was bizarrely able to enter the candidates-to-take-seriously club that Obama would surely have a field day with what would surely follow during the general campaign. And, right or wrong, Santorum’s “google problem” just isn’t very presidential (even if it has been mitigated by his polling surge). His fight with google to remove the page from its results is nakedly hypocritical, since he made the first amendment the centerpiece of his attack on the contraceptive rule he so hates. If Romney is unelectable, Santorum is electoral poison.

Newt Gingrich is… well, Newt Gingrich. Between his bizarre plan to create a moon base post haste and his bogus allegations that Obama is weak on defense and will “wage war on the Catholic church the morning after he is reelected” — interesting choice of words — he will not ever be the president.

So that leaves Ron Paul, who also will not win the presidency. He polls consistently but never too well. Establishment republicans try to bury him. He’s been called an isolationist for wanting to bring most all of the troops home. He has been very consistent in his libertarian, small-government views; but some of them, like closing five government agencies including Education and Interior, seriously lack crossover appeal. He has called unions unconstitutional, as well as Social Security and Medicare. He has some baggage in the form of intensely racist newsletters published under his name that he half-assedly tried to dodge responsibility for. I can’t see him winning against Obama in a general election.

Knowing that there is little chance of a meaningful third party emerging, only a republican has any chance at all of winning the election against Obama. So what is a republican to do knowing that no republican will win in November? What is someone who wants to unseat Obama regardless of party to do? It seems the best course is to choose a nominee who has the best chance of forcing Obama to answer for his crimes or discrediting him in some way during the general campaign.

It can’t be Romney, whose aforementioned flip flops have done a pretty good job of discrediting himself. Plus, Romney and Obama are so alike — both of them millionaire lawyers in the back pocket of Wall Street — that they hardly offer much of a contrast, and if Romney were to win the nomination (as seems likely) he will definitely “tack to the center” to try to pick up the independent vote, further eroding any differences. It can’t be Gingrich, whose history of ethics violations, marital infidelity, and insane bluster render him little more than a mysteriously not-irrelevant blowhard windbag. And it can’t be Santorum, whose bizarre fixation on religion and culture war issues has painted him into a corner. Santorum won’t be able to stop himself from attacking Obama on this narrow category of topics since it is all he knows, and that effort will appear as hollow as it is to the general electorate  All three of these challengers have the same position on Israel and Terrorism, Gingrich’s easily discredited claims to the contrary notwithstanding. Attacks on Obama from any of the three will be rhetorical, not substantive.

Contrast this with Paul, who really differs from Obama. Paul wants to end the drug war. Paul hates the Patriot Act Obama continues to support and condemned the CIA assassination program Obama started. Paul wants to scale back or end the foreign wars Obama continues to prosecute. Paul has called Bradley Manning a patriotic hero, while Obama presided over Manning’s lengthy, charge-free, and illegal pre-trial confinement, and even publicly passed judgment on him during that time. These are real, substantive differences that simply won’t be addressed during the general campaign if anyone but Paul is the republican nominee.

This idea is thankfully not mine alone. Late last year, Salon’s Glenn Greenwald spelled out the benefits of Paul’s candidacy, and his piece is well worth the read. One of the most dangerous developments of Obama’s presidency is that many aspects of the Bush/Cheny civil liberties assaults that Obama campaigned on rolling back have now been codified as untouchable bipartisan consensus. What was vilified on the left when Bush did it is now widely supported by the same group now that Obama is doing it. There is still time to change this sad development, but only if an honest dialogue about it is forced on the national stage. A Paul republican candidacy in the general campaign is the only way I can think of accomplishing that end in the near term.

I question whether I could support Paul in the general election; many of his policy positions, some of which I outlined above, are probably disqualifying in my judgement. I don’t think I want to see the Department of the Interior closed, for example. The newsletters call Paul’s character into question. He’s also really old, so electing him to a job that its holders generally try to keep for eight years is maybe not the wisest choice. It isn’t immediately clear that a Paul presidency is a better thing for the country than another Obama presidency. But what is clear is that a continued Obama presidency is not a good thing for the country, inevitable though it seems to be. Anything that serves to nudge the administration to the left on some of the most important issues faced today can only be a good thing. That is why Ron Paul should win the republican primary.

It’s too bad then that the only question left is how long before Romney seals the deal and we end up with another four years of Obama. Super Tuesday might help settle it.

2 replies on “why Ron Paul should win the primary”

Thanks. I legitimately appreciate the insights. I know you wish I was, we all were, more political, and I’ll save you the time it would to criticize my political apathy by reminding you that I’ve already heard it (although perhaps a blog about why we all ought to be more political would be worthwhile…?). However I do like to be at least very basically informed which has been painful to do due to the idiocy of the republican candidates and your thoughts here were well-considered and helpful.

Let’s get out and vote! Let’s make our voices heard! We’ve been given a sacred right to choose between a douche and a turd!